I know it's only been two weeks but sure seems longer.  I think part of the reason is that I worked on four different pieces during my ten days of "pick a stitch" at the end of the month.  I'm used to seeing three pieces a month, so if there were six, it has to have been a long time.

Lots going on in the family the last couple of weeks.  A couple of highlights: 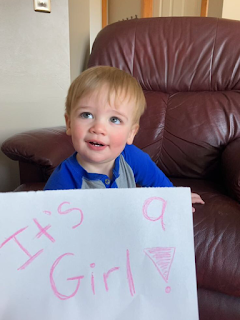 He's going to be a really good big brother.  The photo started my search for a pattern for an announcement.  I've found two in my stash - Baby Bug Ball and Sophie's Roses both by Shepherd's Bush - that I keep coming back to, but I haven't started surfing for patterns yet.

Next was that DS moved into his first Michigan apartment (he lived in several when he lived in New Hampshire).  As a housewarming gift, I did this for him: 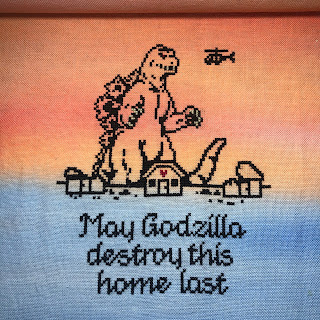 The pattern is from Ampyfied on Etsy.  The fabric is 32-count Pacific Sunset from Sunny*Dyes Fabric and the thread is DMC.  The only change I made was to stitch the heart in red.  I'm planning to finish this as a pillow.  I've got it in my head to have a cartoon-ish fabric on the back (I'm sure I can find Godzilla fabric on Etsy) with black piping.
Stitching-wise, Japanese Zen Moss Garden had one more day of rotation.  I had grand plans of getting the center finished and some beading started.  Unfortunately, I realized that I'd done Algerian eyelets instead of Rhodes stitches in a couple of places and had to do some frogging.  So while no beads, I did get most of the center done.  Here's where it was: 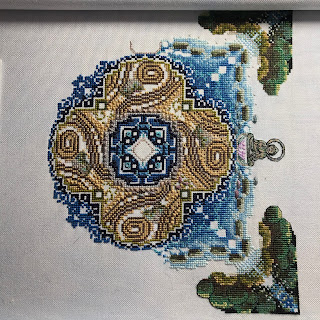 and here's the center with the specialty stitches done - most of those blank areas are beads or crystals: 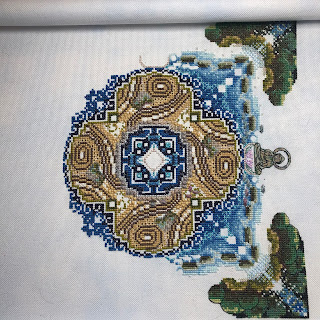 After finishing Zen's 10-days, I put Temperature Tree by StitchinMommy on Etsy on the frame and finished off February and got March started. 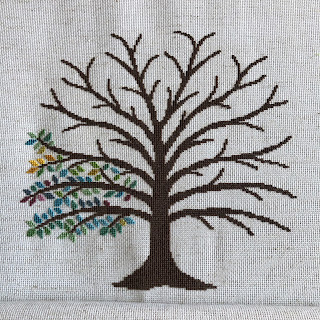 See those four gold/yellow leaves?  That's the end of winter in central Virginia.  We'll still have cool evenings and even a cool day or two - like today's 45 F - but we won't have any more really cold snaps.
Once I got the leaves on the tree, I picked up my secret stitching and got it finished.  I do need to finish-finish it, but I have a bit of time before it needs to be done.  After that finish, I started and finished May Godzilla Destroy This Home Last.  I had a few days left in the month, so spun the  wheel of what's next? and worked on Garden Fair by Courtney Collection.  I started this in January of  2020.  It's been touched once since.  When I last stitched on it, it was here: 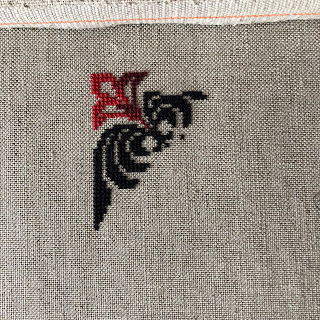 and when I put it away after it's 2-1/2 evenings of stitching, it was here: 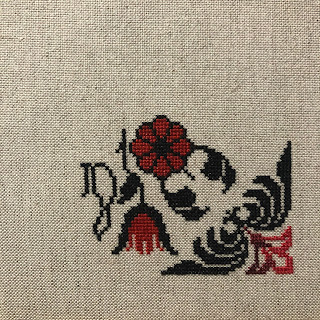 The before picture is wrong way around, I started this one in the lower right corner for some reason - I'm sure it made sense when I did it.  I'm stitching this on 40-count Mallow using Anchor black and DMC 817.  I will eventually frog the red corner motif but I wasn't in the mood for 1-over-1 frogging.
Goldie went back on the frame for her ten days yesterday.  I didn't get enough stitches in last night for them to be noticable, so no progress picture of her.
And before I totally forget, last Sunday was WIPocalypse check-in day.  Fortunately, Melissa keeps that post open for stragglers.
Melissa at Measi's Musing started 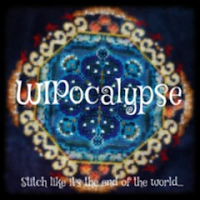 in 2012 so we had a place to show the projects we wanted to finish before the end of the world and it's just kept going.  Click on the badge at the top and it will take you to the official basics - there is also a Facebook group if you're more comfortable there.  I have two official WIPocalypse pieces, Goldie and Japanese Zen Moss Garden.  Zen's current picture is back just a bit in this post and Goldie's most recent picture is in my last post.  There are cues each month and this month's is: What is your process for working on WIPs? Are you a one-at-a-time stitcher, a rotation stitcher, or something else?  I am primarily a rotation stitcher.  I have had as many as 25 and as few as two projects in a rotation.  25 was right out - touching something for an average of two weeks a year did not make for much progress but it did provide a lot of variety.  Two provided progress, but not a lot of variety.  This year, I've found a rotation that allows for both productivity and variety.  My WIPocalypse pieces are my focus pieces.  I stitch on Goldie from the 1st through the 10th of each month, Japanese Zen Moss Garden from the 11th through the 20th, on the 21st I add leaves to Temperature Tree and then I spin the wheel of what's next? and work on that project through the end of the month or until I get tired of it.  If I get tired of it, I spin the wheel again and work on that project until the end of  the month, or until I get tired of it, repeat as needed.  Basically, those last 10 days are "stitch what I want with some guidelines".  BUT all that changes when I have a project with a deadline.  2020 was primarily a one-at-a-time year with two littles joining the family so double the announcements and Christmas stockings.  I will go OAAT once I find an announcement for Baby Girl W and when her Christmas stocking is picked.  I will probably replace my last 10 days with knitting as the blanket is taking much longer then expected (which I tend to say about all my projects)  I'll pick my rotation back up when I've finished all her stitching.  Going back into the office will also require me to evaluate my rotation, but we'll not talk of that right yet.
I havn't done any stitching today and not sure I will.  I had a cramp in my right hand this afternoon and it still hurts.  Sounds like a good evening to read.
Hope everyone is well.
Posted by Susan at 9:16 PM

Each one of your pieces look great, Susan! The Godzilla piece for your son is precious. Awesome news that Grady is going to be a big brother to a little sister. Have a blessed Easter weekend!

Jo who can't think of a clever nickname said...

I love that Godzilla design and the fabric is gorgeous! Godzilla goes well with the Japanese Zen Garden too, don't let him destroy it!
Congratulations on the forthcoming new baby girl, always nice to have a baby to stitch for.
I like your rotation, it is actually very similar to the way I organise my projects.

Great stitching, I love the godzilla piece! And the tree is starting to look real nice too with all the different coloured leaves coming in. Looking forward to seeing all your new baby crafting soon!

For My Reading Pleasure

Susan
Stitching in my little corner of Virginia with The Hubs and three little tyrants, um I mean cats.

On the WIP Wheel

22 Other Works in Progress